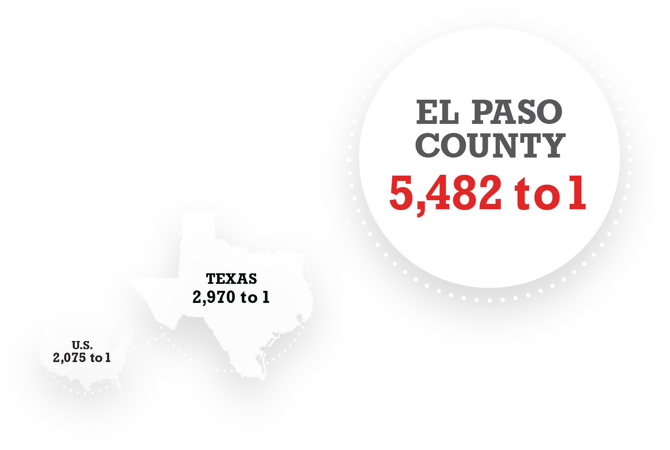 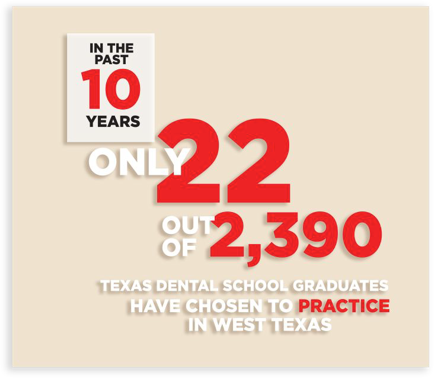 It’s been 50 years since Texas’ last dental school opened, at a time when the state’s population was approximately 11 million. It’s now over 28 million and existing dental schools are unable to meet the needs of this expanding population.

Today, there are only three dental schools operating in Texas, and they are all in the eastern part of the state, hundreds of miles from El Paso. Most graduating dentists establish their practices in proximity to their dental school. 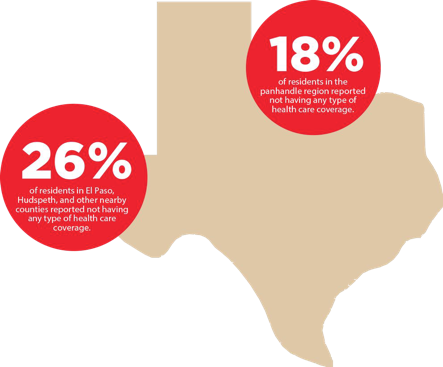 This Trend Should Not be Allowed to Continue

Lack of dental care is a public health issue that affects all residents of Texas. In children and adolescents in particular, the lack of dental upkeep impacts daily productivity and is linked to malnutrition, school absences and lower academic performance.

Young children are even more vulnerable since they are in the process of losing baby teeth and growing permanent adult teeth. Learning healthy oral hygiene practices is critical at a young age, but unfortunately, many children in Texas are already experiencing poor oral health as young as 3 years old due to lack of access to dental providers.

When initial signs of oral health issues are not addressed at a young age, other health-related conditions and complications can progress throughout adulthood. 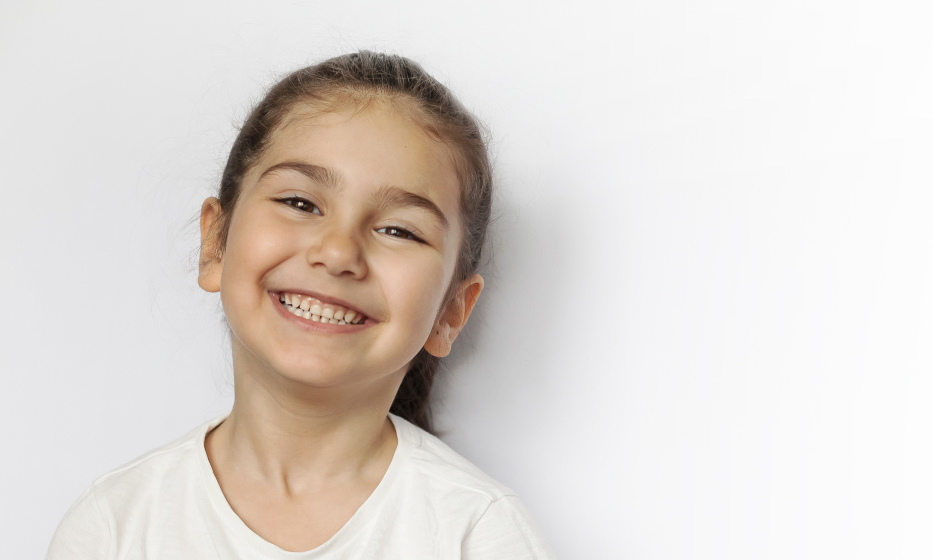 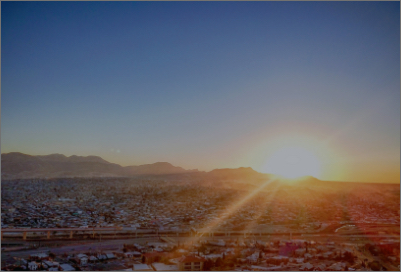 Only one dentist for every 5,482 residents in El Paso 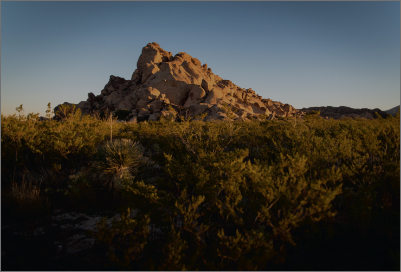 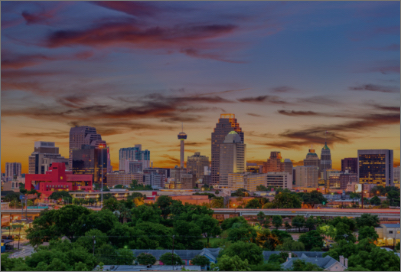 Fifty-three percent of Texas' general dentists are currently located in the five most populated counties, hundreds of miles from West Texas 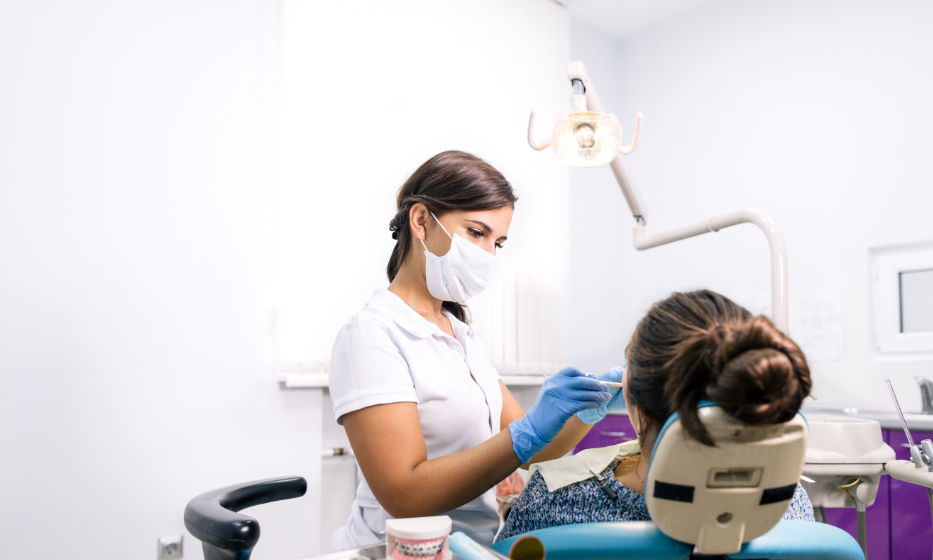 Hidden Beneath the Surface

Dental hygiene can have an impact that goes far beyond what your teeth look like on the surface. Periodontal (gum) disease is associated with chronic diseases and metabolic syndrome – a cluster of conditions including high blood pressure, high blood sugar, and excess body fat around the waist.

Poor dental health is linked to many chronic conditions such as cancer, diabetes, heart disease, and stroke. In addition, poor oral health is associated with adverse pregnancy outcomes such as low birth weights and premature death.

El Pasoans face increased health disparities that are exacerbated by a substantial shortage of dentists to serve its growing population.

Most graduating dentists establish their practices in proximity to their dental school. As such, general dentists are not evenly distributed across the state of Texas. Fifty-three percent of Texas' general dentists are currently located in the five most populated counties, hundreds of miles from West Texas.

In the past 10 years, only 22 out of 2,390 Texas dental graduates have chosen to practice in West Texas. In 2017, there were over 300 Texas dental school graduates, but only two opened practices in El Paso. 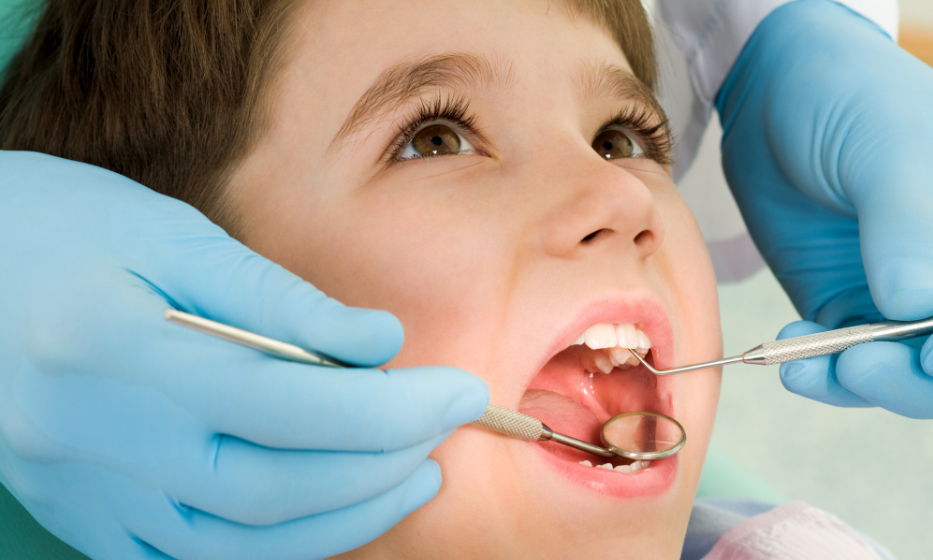 The Woody L. Hunt School of Dental Medicine will produce dental professionals ready to open practices in El Paso and West Texas. The school will make a lasting and positive impact on the dental health of West Texas residents. 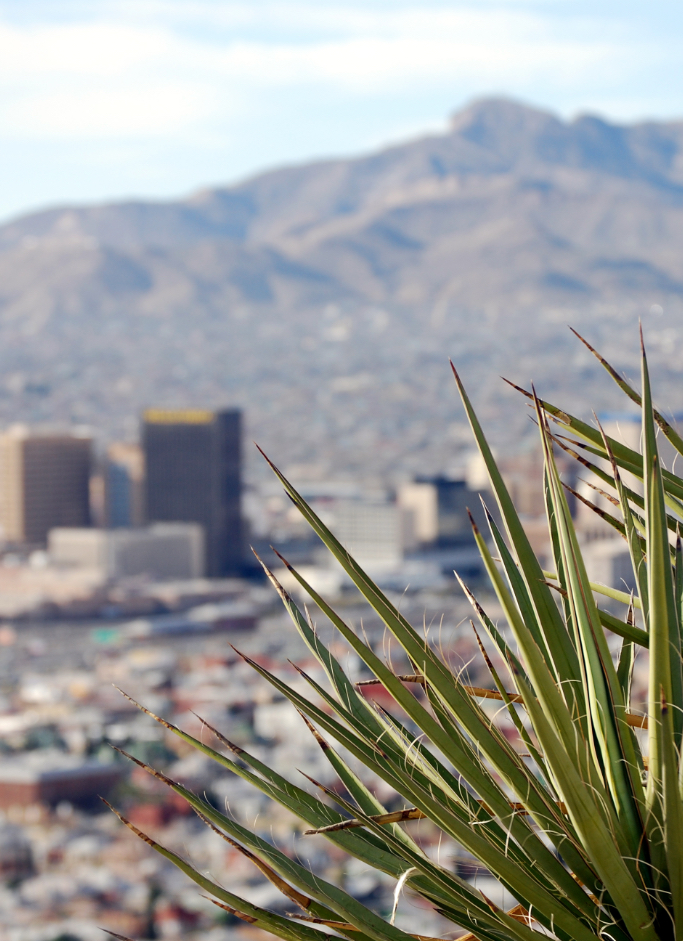 For nearly five decades, TTUHSC El Paso has been dedicated to improving the lives of over 2.7 million people in the El Paso/Juárez region.

Seeing the need to reduce critical health care disparities in the region, the El Paso community came together to establish a four-year medical school of its own. In 2009, the Paul L. Foster School of Medicine welcomed its first class of 40 students.

In 2013, as the school of medicine received its full accreditation, TTUHSC El Paso was established as an independent university within the Texas Tech University System.

Today, TTUHSC El Paso is comprised of three schools: the Paul L. Foster School of Medicine, the Gayle Greve Hunt School of Nursing and the Graduate School of Biomedical Sciences. The addition of the Woody L. Hunt School of Dental Medicine — scheduled to open in 2021 — will further secure our legacy as an institution that is making a lasting impact on health care in the Borderland.

The Dental Learning Center is the centerpiece of the Woody L. Hunt School of Dental Medicine. It will feature 80 simulation stations equipped with high-tech, movable manikins for dental technique practice. The stations will have computer monitors, connected via LAN to an instructor station for enhanced audiovisual education. In a laboratory on the same floor, students will use 3D scanners and CAD/CAM machines to fabricate dental restoration devices and appliances.

The dream of a school of dental medicine is now a reality thanks to the generous support of the El Paso community. In 2016, El Paso businessman Woody L. Hunt presented a gift of $25 million from the Hunt Family Foundation to establish the school, soon followed by a $6 million grant from the Paso del Norte Health Foundation to support the school’s curriculum. 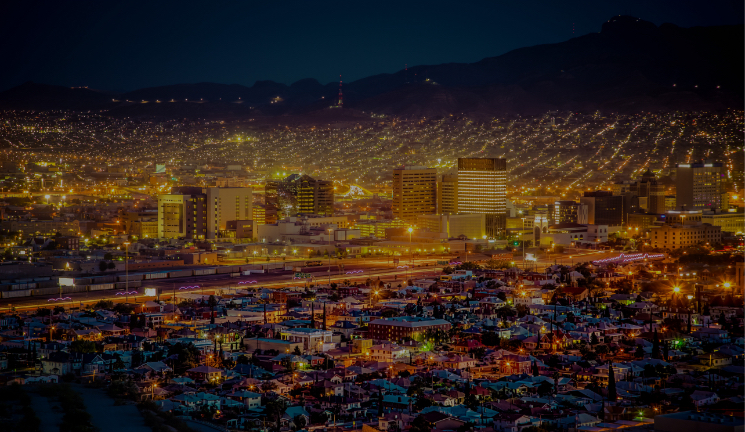 The Woody L. Hunt School of Dental Medicine will make a transformative impact on access to dental care in West Texas, thanks to a planned community dental clinic, where students will provide patient care under faculty supervision. The 38,000-square-foot clinic, offering services at an affordable cost, will be located on campus near the school. It will be equipped with 130 dental operatories — working spaces that include a patient chair and lights, dental instruments and other equipment necessary to treat patients. 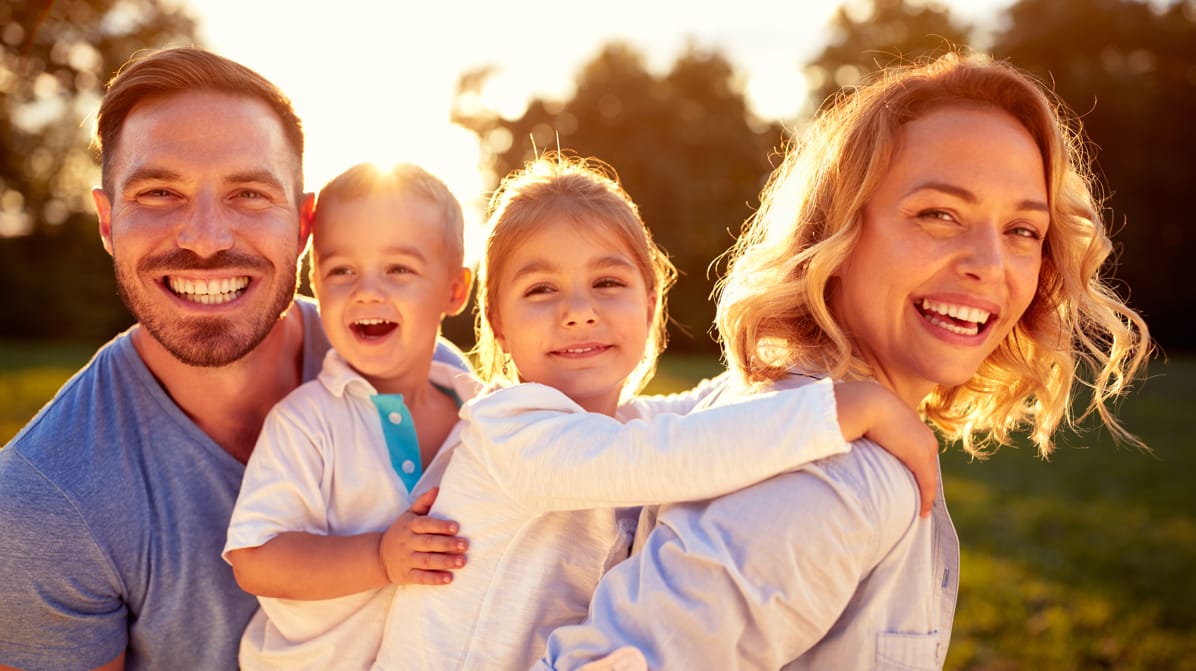 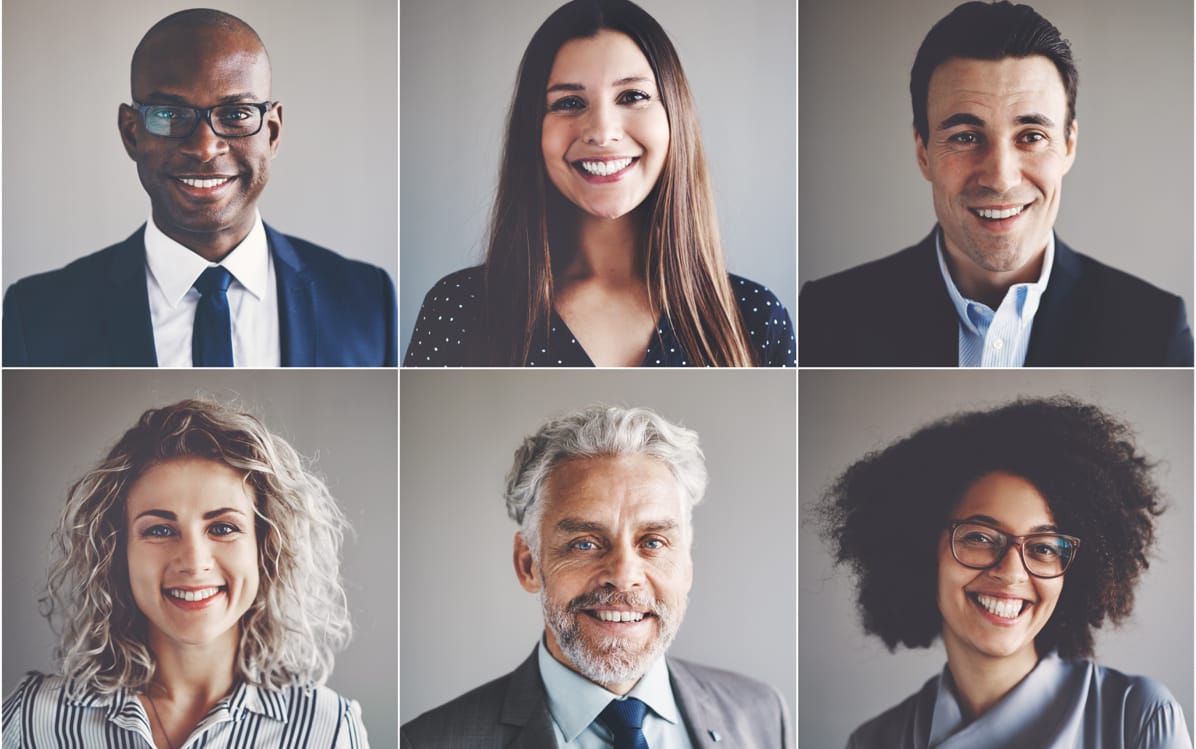 As we move forward, we hope that you will join us in advancing the mission of the Woody L. Hunt School of Dental Medicine.

Support of endowments and other funds will enable the school to recruit and retain world-class faculty and provide students state-of-the-art instruction, technology and scholarships.

Be a champion of the Woody L. Hunt School of Dental Medicine and pledge your gift today!

Your Support is Critical

Establishing a dental school in El Paso is an ambitious undertaking, requiring the support of the entire community.

TTUHSC El Paso has gained significant support for the Woody L. Hunt School of Dental Medicine. Public meetings and forums have helped raise awareness of the critical shortage of dental health providers while underscoring the value the school would bring to the region. As a result, many potential donors have begun to express their interest in supporting the school.

Thus far, $31 million has been secured to establish the school. TTUHSC El Paso has a goal to raise $90 million in additional private funding to support the school’s start-up costs and endowment funds to ensure the school will attract top faculty and offer state-of-the-art training for years to come. The school will welcome its first class of future dentists in 2021.

TTUHSC El Paso has been built on philanthropy. Because of the shared values of community visionaries, our health sciences center has transformed the Paso del Norte region into a hub for education, research and patient care in West Texas. Our medical, nursing and biomedical sciences students provide over 19,000 service hours annually, and our physicians conduct over 220,000 clinic visits each year. None of this would be possible without your support.

With your gift, we will continue to expand our mission of serving more El Pasoans, supporting life-changing research and educating the next generation of health care professionals. We look forward to working with you to establish a legacy gift that will support the mission of TTUHSC El Paso’s students, faculty and staff for generations to come.

Become a Friend of the Dental School 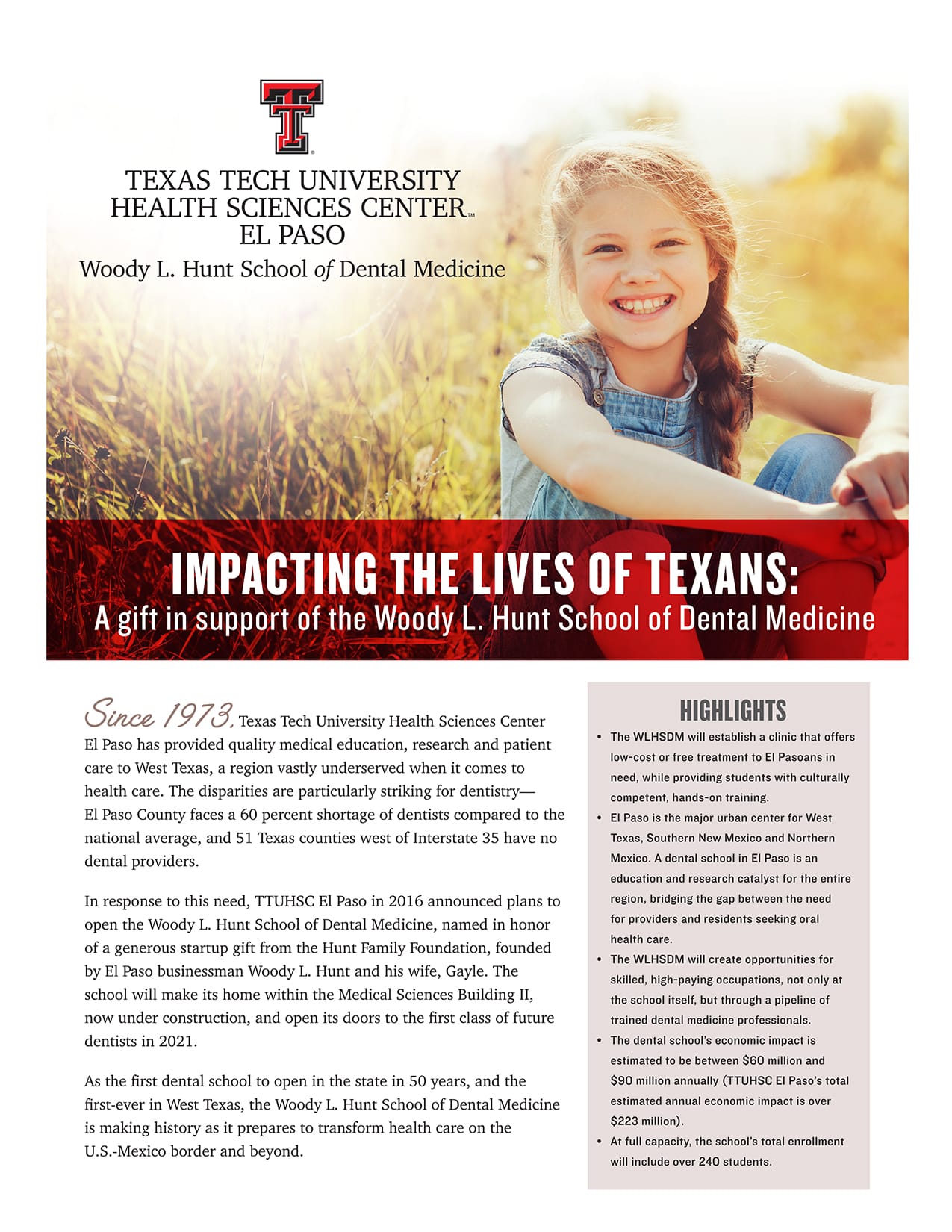 Impacting the Lives of Texans 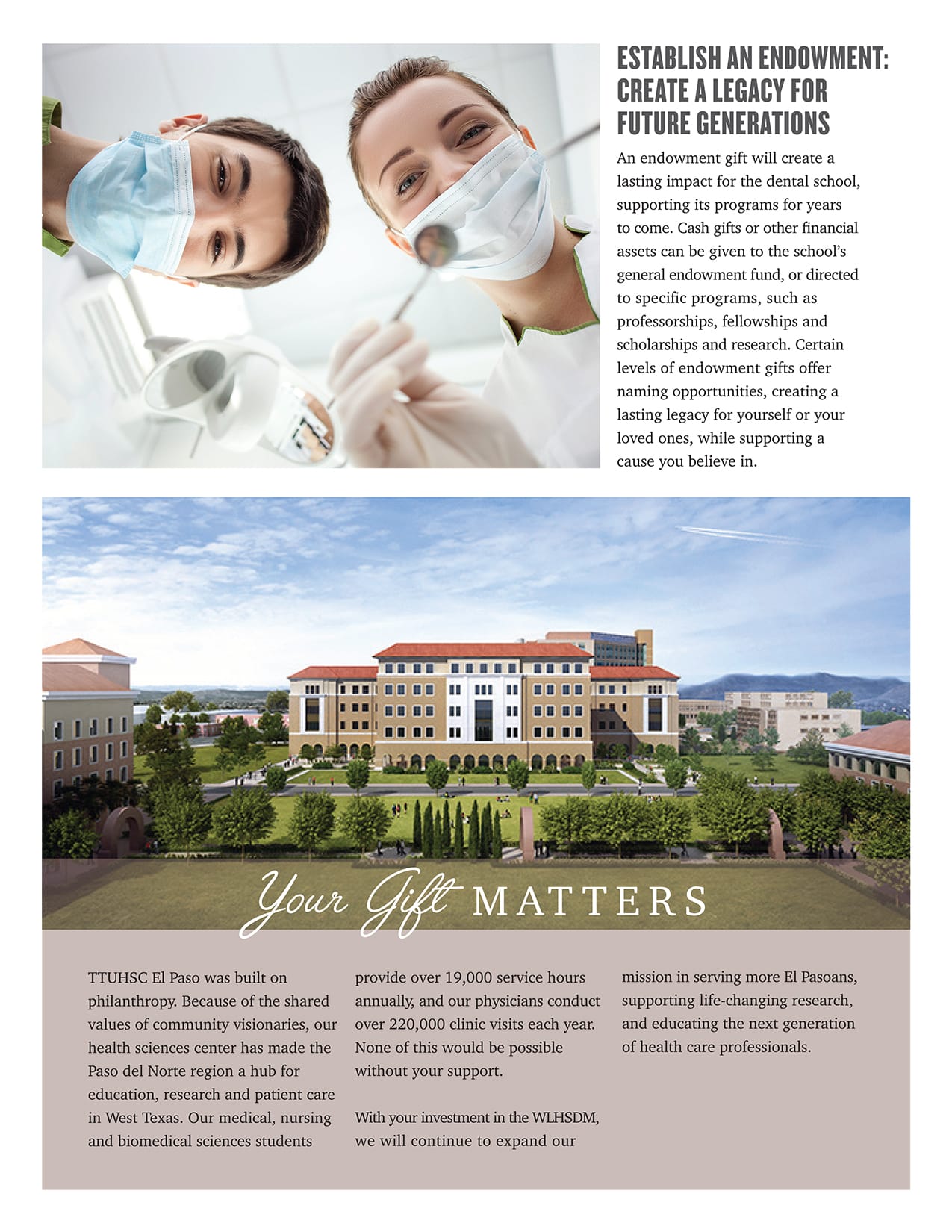 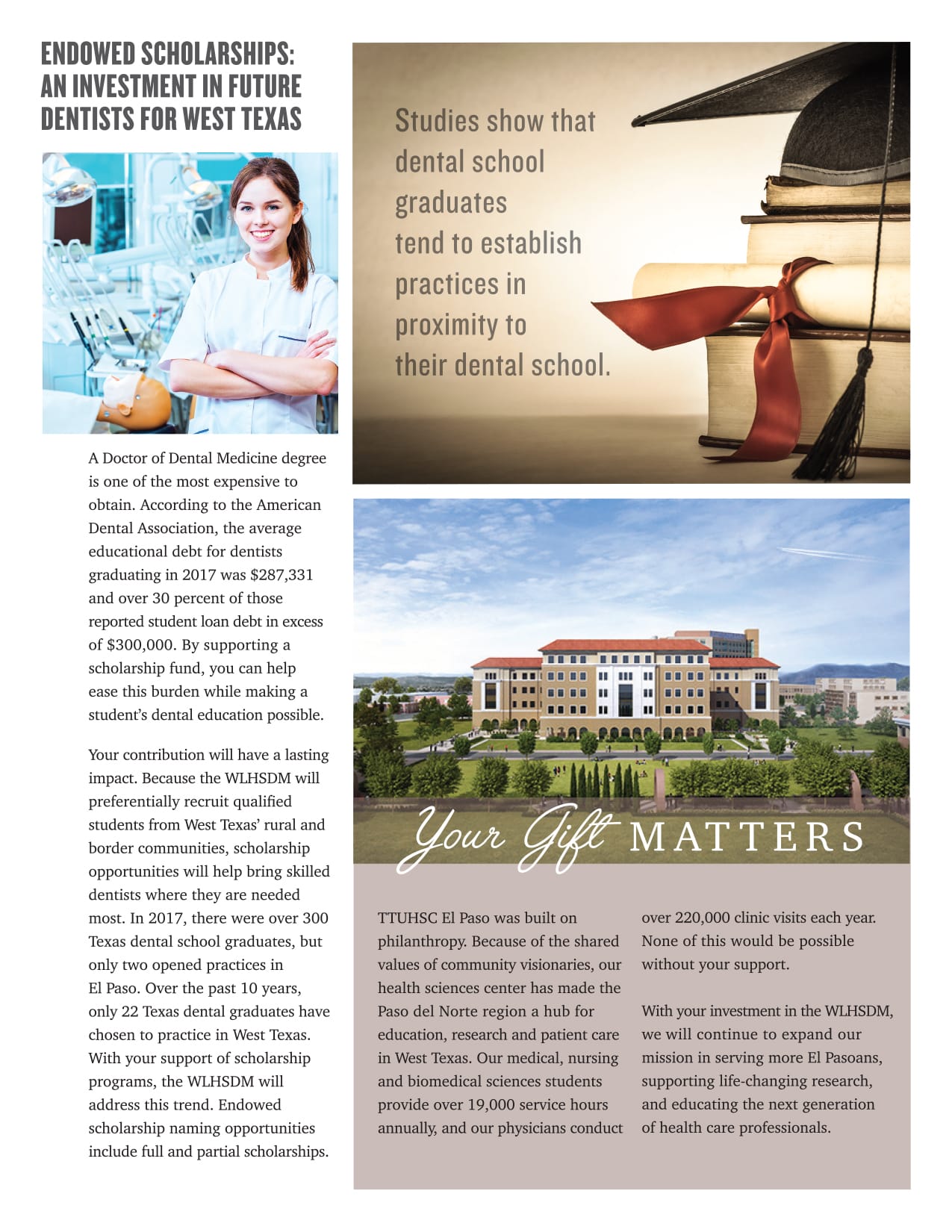 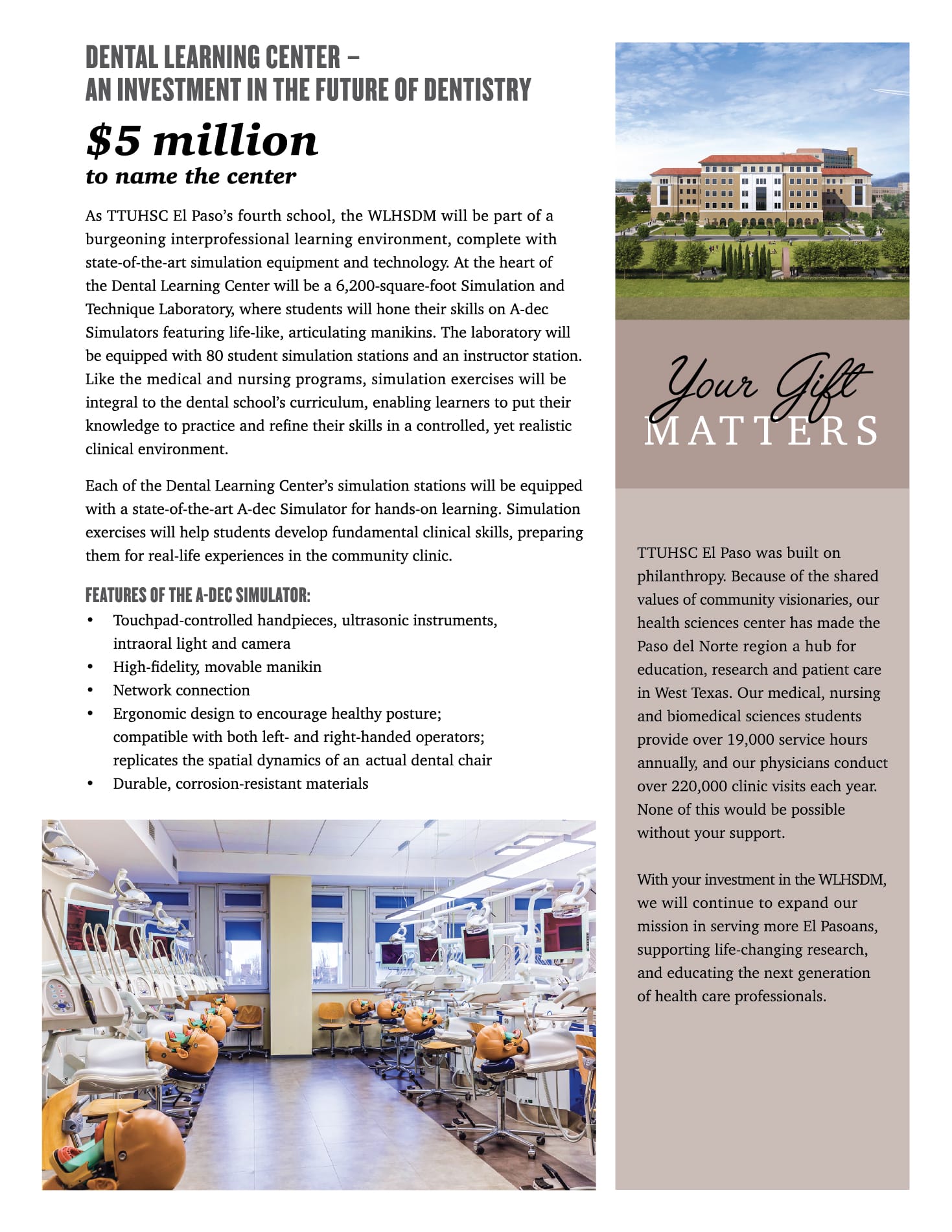 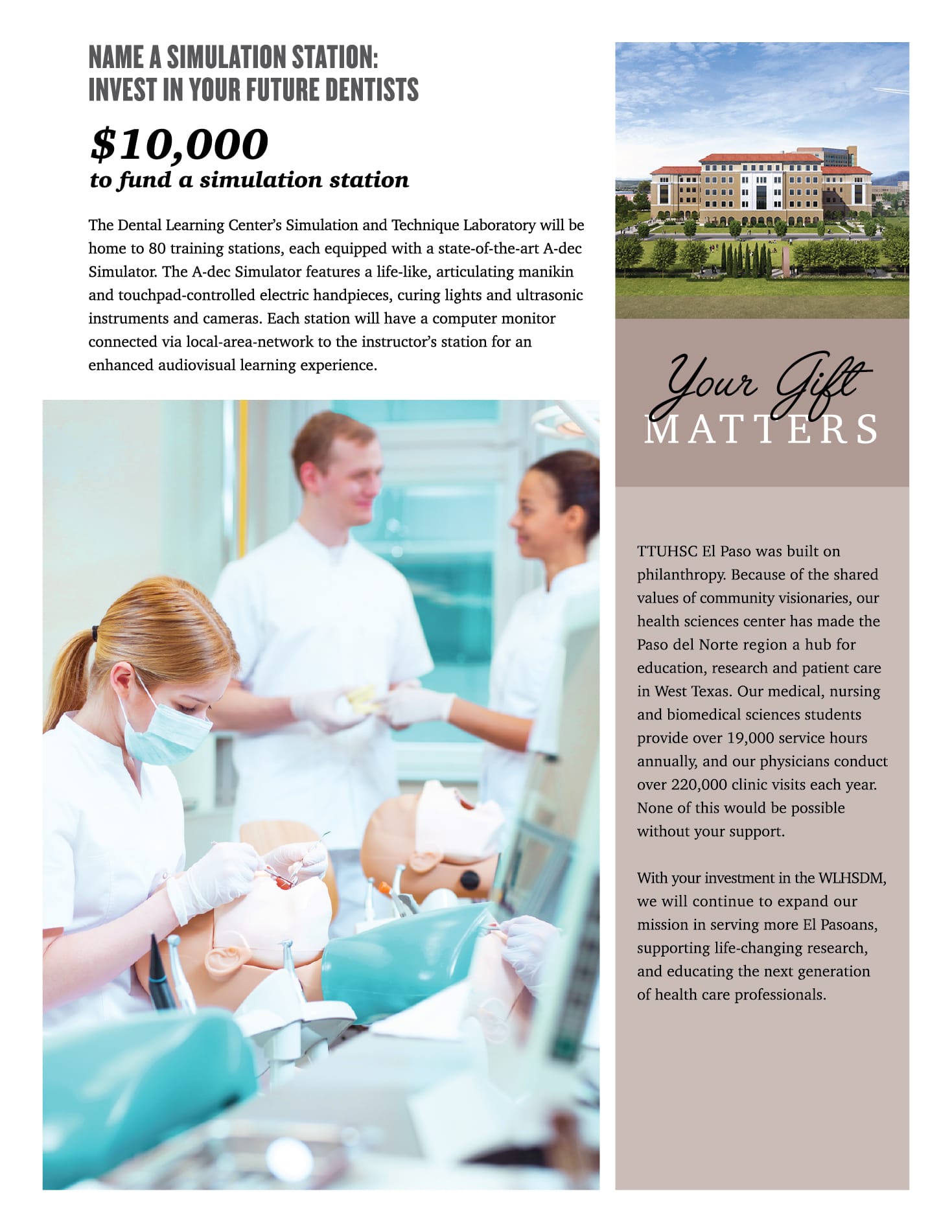 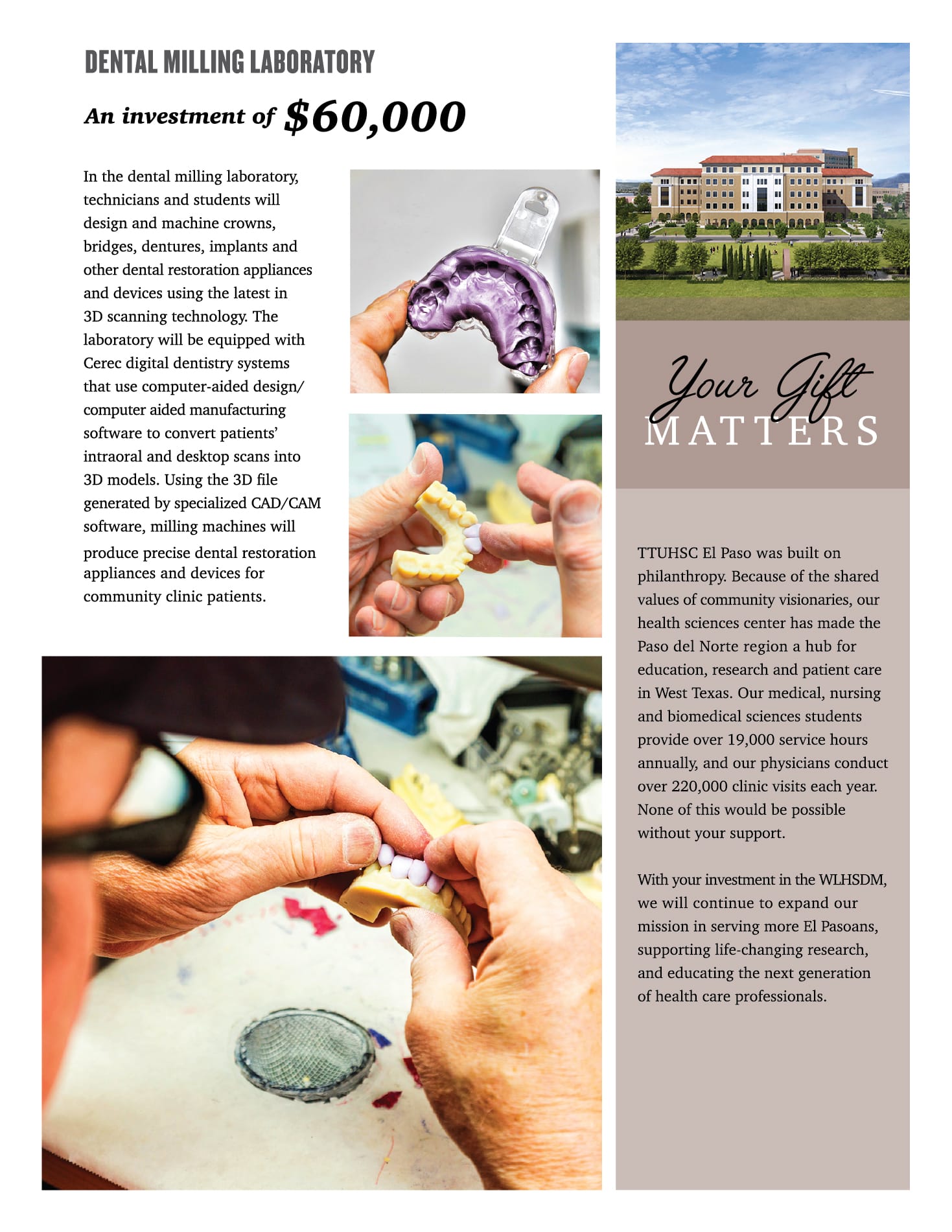 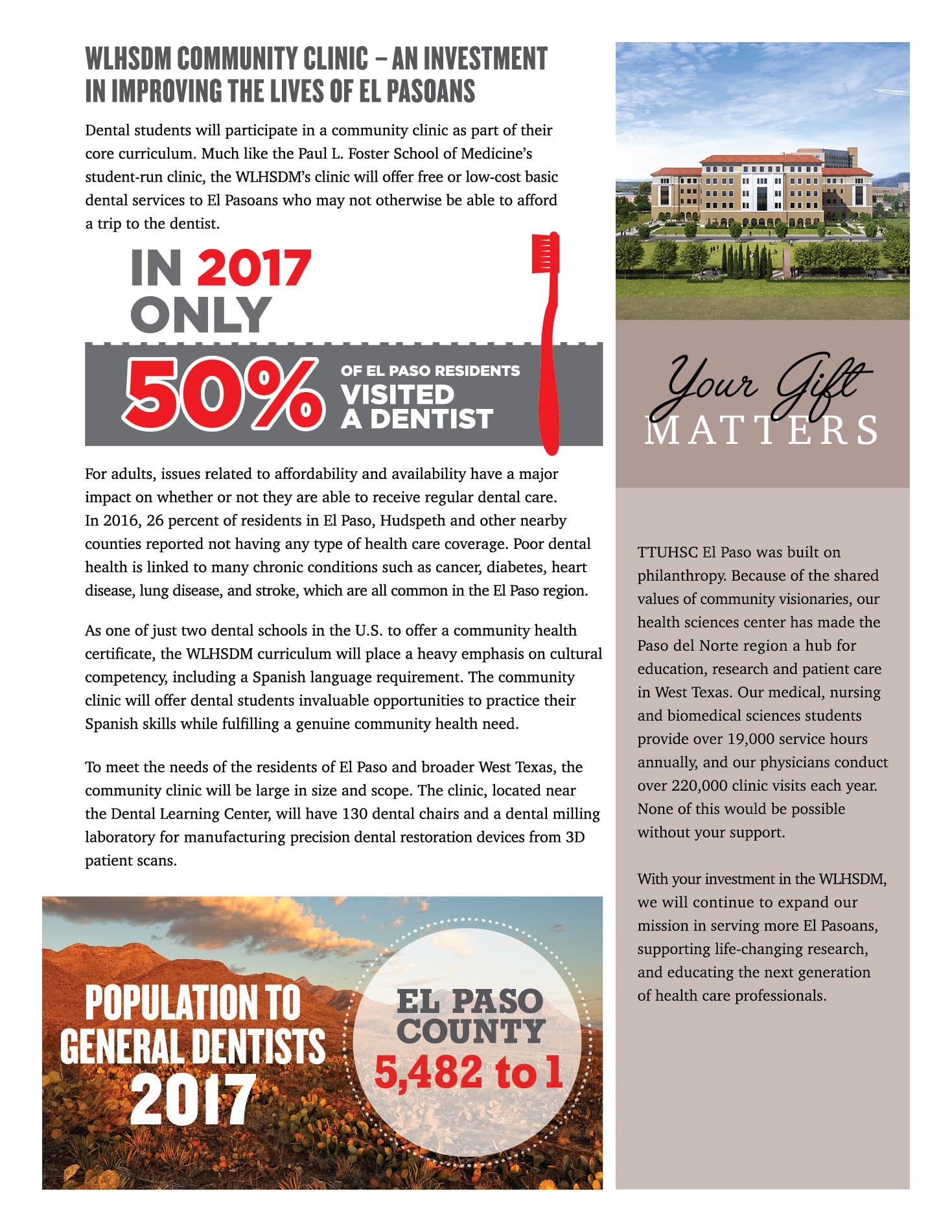 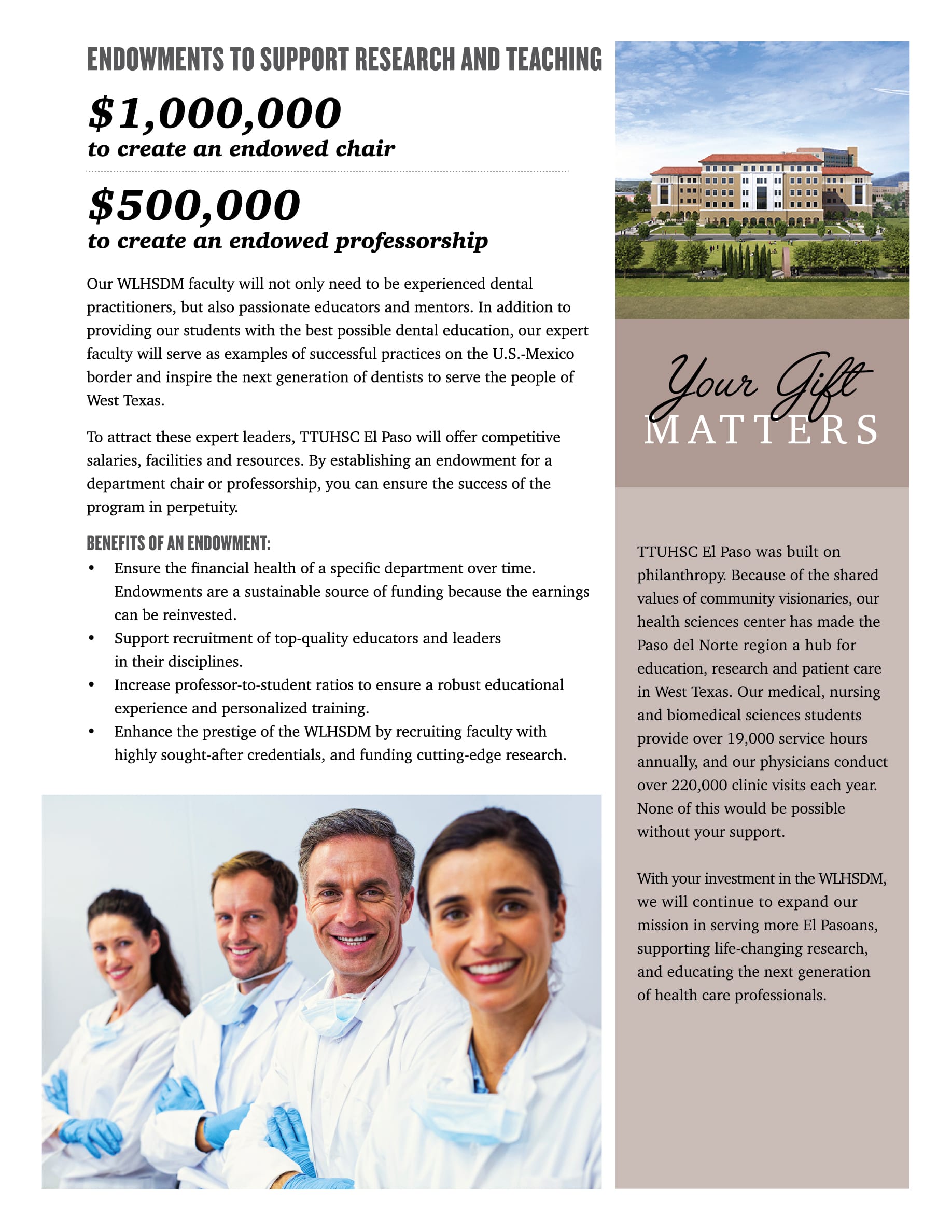 It’s only through your encouragement, contributions and endorsements that TTUHSC El Paso can develop and build the Woody L. Hunt School of Dental Medicine. The creation of this program will have a positive impact on West Texans’ dental and overall health for generations to come.